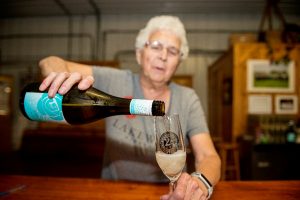 Bubbly Candeo was not the only Lakewood wine to win Double Gold. The 2016 Dry Riesling, 2016 Riesling and 2016 Pinot Gris were all awarded Double Gold to round out a strong showing for Lakewood’s entries.

NewYorkUpstate.com held a readers’ poll asking people to vote for their favorite upstate New York winery. The top five wineries in the voting were then visited by three members of the NewYorkUpstate.com team—and they named Lakewood Vineyards the Judges’ Choice Award Winner.

During their visit, the judges were especially fond of our Bubbly Candeo, a light, crisp sparkler similar to Prosecco. They also enjoyed the Lemberger, naming it Best Dry Red in their quest for the best.

Lakewood Vineyards president Chris Stamp says, “Thank you to all the fans who voted us into the final round, and to the judges who took their time to come experience Lakewood’s wines first-hand. We truly appreciate the recognition.”

Lakewood is open daily for wine tasting and sales: 10am to 5pm Monday through Saturday and 12pm to 5pm Sunday.

Seems that people are ready to get out and get going!  Lots of calls and lots of bookings.  Personally, I think May and June are the best times to visit the Finger Lakes.  It is a time when the weather is improving and school isn’t out yet so there are not as many people traveling.  Let’s face it:  wine tastes great any time of the year.

For most of my life, I have driven past this dairy barn just off Route 96A on East Lake Road.  Pretty much there was nothing going on there most of the time, except for occasionally some hay being loaded onto a flat bed.  That has changed in the past few years!  Bottomless Brewery transformed into a hot spot of the region.  This is a farm brewery that serves their own beer which is brewed on property.  Among other brews, they have Cider, Raspberry Wheat, Belgian Wit, Pilsner, Pale Ale, and Oak Smoked Brown Ale.  Yesterday I took my couple in there as the final stop on their tour.  My couple was from the Scranton area and visit the area 2-3 times every year.  We met 2 couples from Michigan who had been traveling for 8 hours to get to the Finger Lakes and to Bottomless Brewery.  We chatted about the other breweries and wineries in the area.  The one couple had been here in the Fall and loved it so much that they wanted to bring some friends back, so here they were.  It just goes to show how far and wide our reputation has spread.  I am proud to live here and to be able to show off what we have!  These are some pics I took from the top floor at Bottomless Brewing.  Check out their website to see the progression from Dairy barn to brewery. www.bottomlessbrewing.com 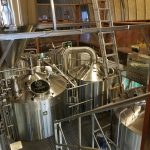 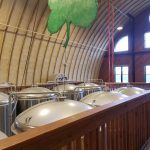 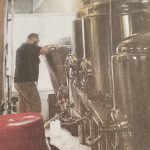 I love the Finger Lakes in the Winter!   Just look at these pics!  There is beauty here year round.  Last week I drove to Connecticut to visit family and as I drove through the Finger Lakes, I was awestruck by the beauty that was all around me.  The waterfalls are located in the Southern parts of the Finger Lakes. These two below are near Watkins Glen.   We have the melting waters of the glaciers to thank for the waterfalls in our region.  I love the way you can see the terrain of the hills when the leaves are off the trees. It appears that there is nothing to hide.  The crisp winter air makes a freshness and clarity that isn’t here other times of the year.  The brilliant snow upon the ground glistens with purity.  It is a beautiful place, and I have been fortunate enough to call it home for my entire life.  Aren’t I just the lucky one? 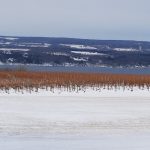 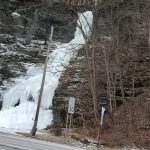 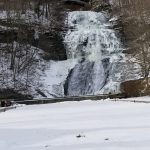 The New York Wine & Food Classic has become known as “The Oscars” of the New York wine industry. The 21 judges include wine writers, wine educators, retailers, restaurateurs and other experts from around the State and country. All samples are judged “blind” on their own merits, with the “Governor’s Cup” and other awards made public as soon as possible after the competition ends. Stay tuned for the results….next week!

Hermann J. Wiemer has purchased Standing Stone vineyards!  Standing Stone has some of the best and oldest vineyards in the Finger Lakes, dating back to the 1970’s. Marti and Tom have given love to the vines, the wines and the visitors to Standing Stone for many years. It’s not easy to just let go so they will be staying on for 3 years to ease the transition. We applaud the wisdom of Fred and Oskar for their foresight and ambition!

Here is part of an article from the Life in the Finger Lakes magazine that will be coming out this Spring.  This is a great magazine to read if you are interested in finding out about the Finger Lakes and all that has gone on and continues to develop.

You have told me how much you have enjoyed Villa Bellangelo winery, now here is a bit more of the background.  Also, keep in mind that now there is a second location for you to visit that is closer to Geneva.

For Chris Missick, the decision to become a winery owner took shape when he got married. Part of the celebration was a wine tour through the Finger Lakes. He and his wife loved it. The couple returned to their home in Los Angeles, and not long after, his mother called and said, “Remember that last winery we visited? It’s for sale.”

Missick made wine as a hobby, but when he and his family bought Villa Bellangelo in the heart of Dundee, he focused on the business side as general manager. Things went fairly well until his winemaker left to make his own product. “That’s when it really started for me,” he said. He had begun the FLCC program in 2015, but that was when he took a step back and decided to become the winemaker at Bellangelo, combining his real-world experience with the knowledge he gained as an FLCC student.

Missick had so many good things to say about the program. “It’s a methodical approach to taking someone who hasn’t been in the industry and teaching them the core basics of the culture of the industry, all the way to the basic sciences of making wine. And that’s where it really gets good. The practice. You understand what you’re going to be doing and then you do what needs to happen in order to make world-class wine.”

Missick and his family have big plans for Seneca Lake Country Club in Geneva, a property they purchased not long ago. Plans begin with a state-of-the-art winery. When Chris’s father, a land developer, visited FLCC’s Viticulture and Wine Center, he fell in love with it and wants to build one for Bellangelo, said Chris.

Marti Macinski tells it like it is at Standing Stone Winery.

We know you think that winter is quieter than the hustle and bustle of summer and fall when all’s abuzz. Many of you assume we close down for the cold season, for lack of things to do. Not so! Todd and Jim have been out in the chilly vineyards mending trellises, replacing posts, clearing trees from the headlands and cleaning up in general. On weather challenged snow and sleet days, they keep very busy fixing and maintaining our 6 tractors and 2 sprayers. At least one day each week seems to call for some pretty vigorous plowing and snow removal, so that customers (some of you!) can find their way into the tasting room. Soon the vineyard team will begin pruning.   In the winery, Jess has pressed and fermented the 2016 Vidal Ice and 2016 Riesling Ice grapes and we’ve bottled more Smokehouse Red.  She’s setting up the racking and filtering schedule so we’re ready to begin bottling at the end of March. Everything, by the way, is delish!